The Best Resource For New Readers 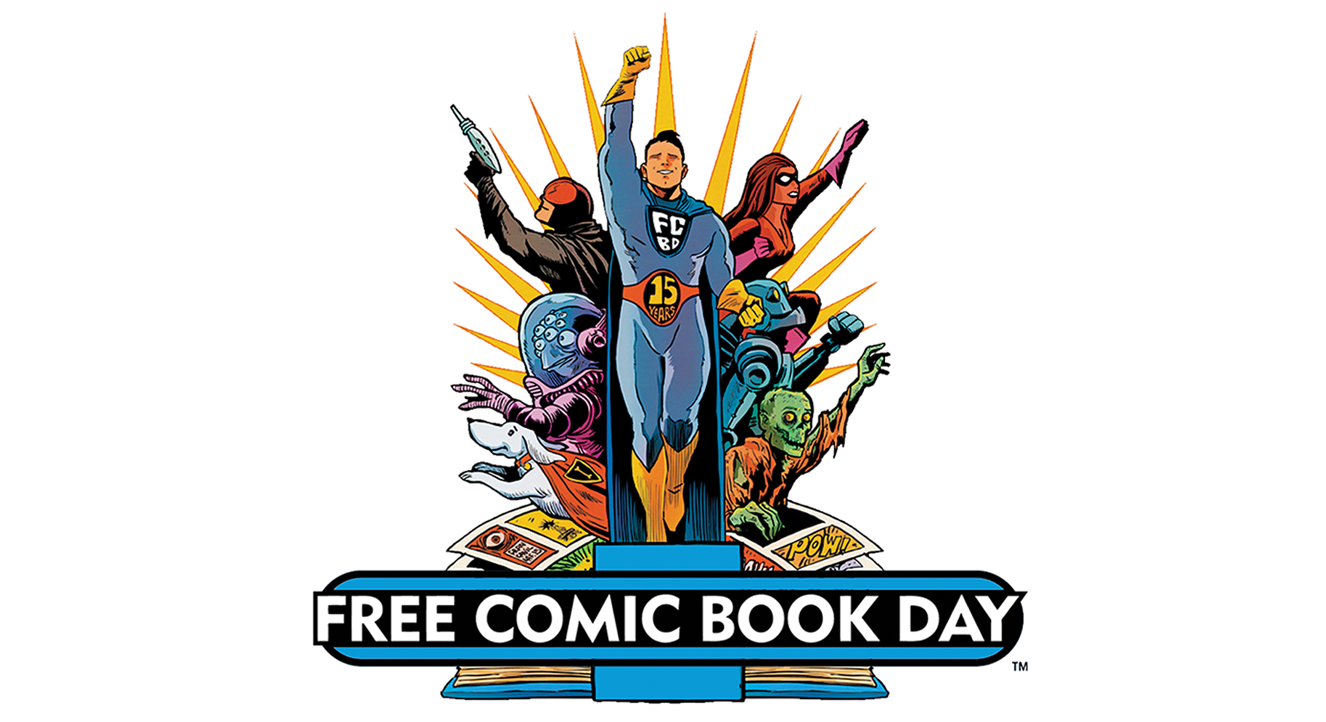 Are you looking to get your kids off their smart devices and into reading? Free Comic Book Day is one of the most invaluable days of the year for opening the door to the world of comics and reading to a younger audience. The annual event has a large focus on family-friendly and community-oriented spaces, with local comic shops around the world offering free comics to all who attend. With different types of comics for all reading groups, there’s always something for everyone, and has proven itself year-on-year to increase reading retention in children and adults alike!
‍
Free Comic Book Day is also perfect for fans and readers to support their local comic book shop. In much the same way Record Store Day highlights the local stores within the industry, Free Comic Book Day is one of the best ways for residents to get to their comic shop and explore what comics have to offer in a family-friendly, inclusive environment.

Free Comic Book Day is the biggest day of the year for all the fans of the medium to come together and share their love with beginners and experts alike. Plus, with the huge success of comic book movies like Avengers: Endgame, there is no better opportunity to give customers the chance to return to the roots of these blockbusters and read the stories of characters they love.

On Saturday May 4th and Bank Holiday Monday May 6th Wyntercon’s sponsor and partner Scorch Comics are bringing the world of Super Heroes to Eastbourne town centre for Free Comic Book Day and a very special Bank Holiday Signing Event. Some of the titles available on the day include Doctor Who, Avengers, Stranger Things, Riverdale, Teenage Mutant Ninja Turtles, Bob’s Burgers, Minecraft and My Hero Academia. 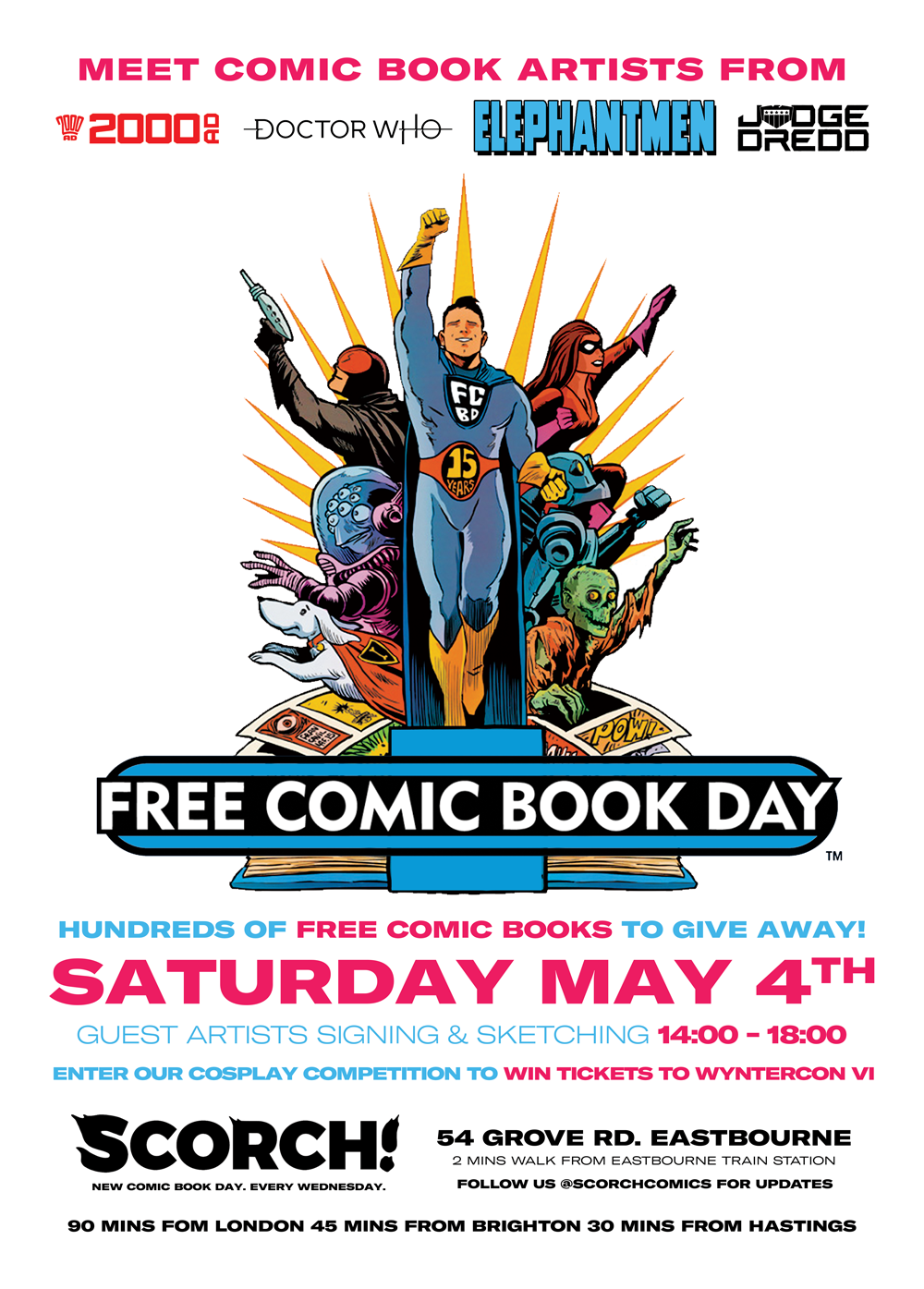 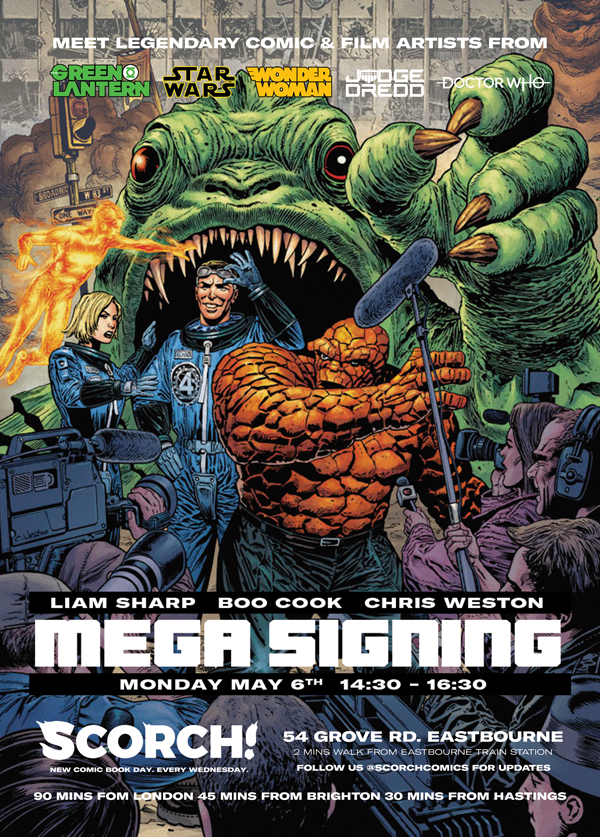 Eastbourne’s own Scorch Comics will be marking the occasion by giving away hundreds of free comics, hosting both a cosplay contest and a sign and sketch event featuring world-famous artists and industry legends!

Known for their pop-up events, Scorch’s extravaganza on Saturday May 4th won’t be the first time the shop has hosted genre legends. Previously Scorch has seen appearances from genre-defining talents such as Mick McMahon, co-creator of iconic British comic book hero Judge Dredd; Chris Weston, the legendary 2000AD and concept artist for movies like Star Wars: The Last Jedi; and Boo Cook, the critically acclaimed artist for Doctor Who and Judge Dredd both of whom will be returning this bank holiday weekend.

Only last week at the local Cineworld Scorch invited Kev Hopgood (co-creator of Marvel’s War Machine and Hulkbuster - as seen in Marvel’s latest box-office smash Avengers: Endgame) to sign and sketch for hundreds of fans as they lined up to see the latest Marvel installment. Speaking to the Herald on the day, Hopgood described his work on Marvel’s War Machine as injecting “punk rock and heavy metal” into the now world-renowned Iron Man franchise. With events such as these Scorch has become something of a hub for the UK’s top comic illustrators. With industry heavy-hitters such as Chris Weston and Boo Cook taking up permanent residence along the south coast, our East Sussex town is a little-noted hotbed for the country’s comic book industry. 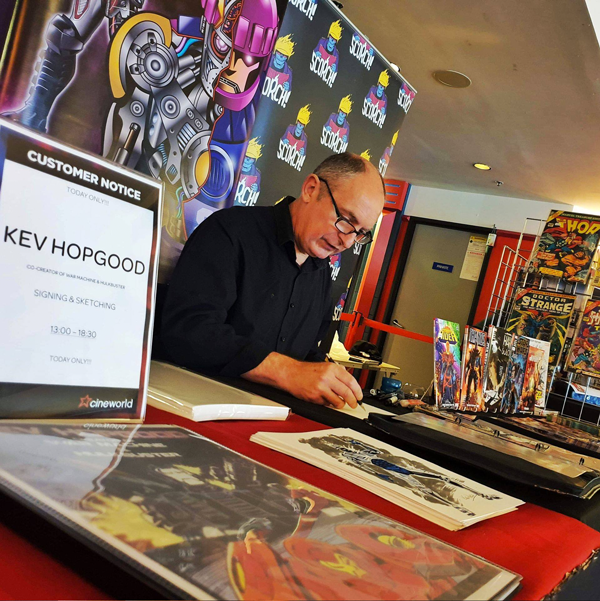 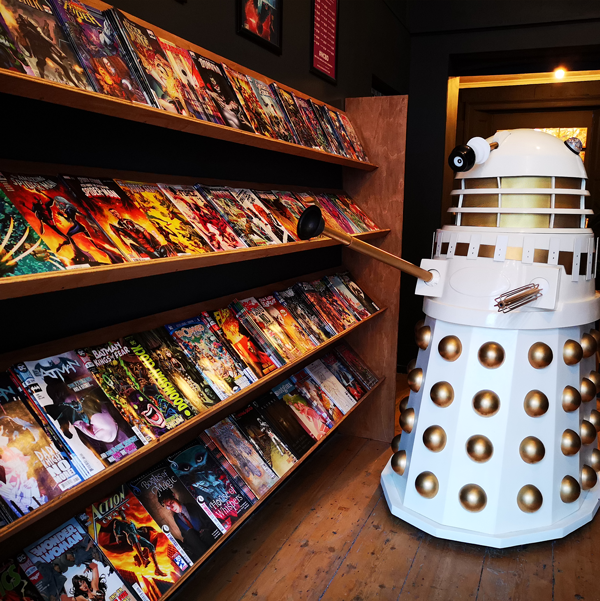 Alongside the signings, and free comics, Scorch invites local cosplayers to show off their favorite character or series. Intrepid fans who attend dressed up as their favourite pop culture characters can enter into a special Free Comic Book Day Cosplay Competition, with 1st Prize being free tickets to this year’s upcoming Wyntercon, the local sci-fi and fantasy convention sure to break records with their new location in September.

For Scorch’s Free Comic Book Day event, local residents are invited to a weekend of festivities with signing events on both Saturday 4th and Monday 6th - events featuring Scorch’s best and biggest line-up yet. To celebrate the release of its free comics on Saturday (May 4th), Scorch hosts 2000AD’s Boo Cook for a special sketch and sign event 2:00pm - 6:00pm. While on Bank Holiday Monday (May 6th), Scorch welcomes both Chris Weston, Boo Cook to sign alongside the critically acclaimed DC Comics artist Liam Sharp from 2:30pm - 4:30pm. Currently Liam is the main artist for major characters such as Green Lantern and Wonder Woman, Liam has earned plaudits for illustrating some of comics’ best beloved characters – icons from Batman to the Hulk. As an Eastbourne College Alumnus, Liam’s guest appearance is a homecoming not to be missed! 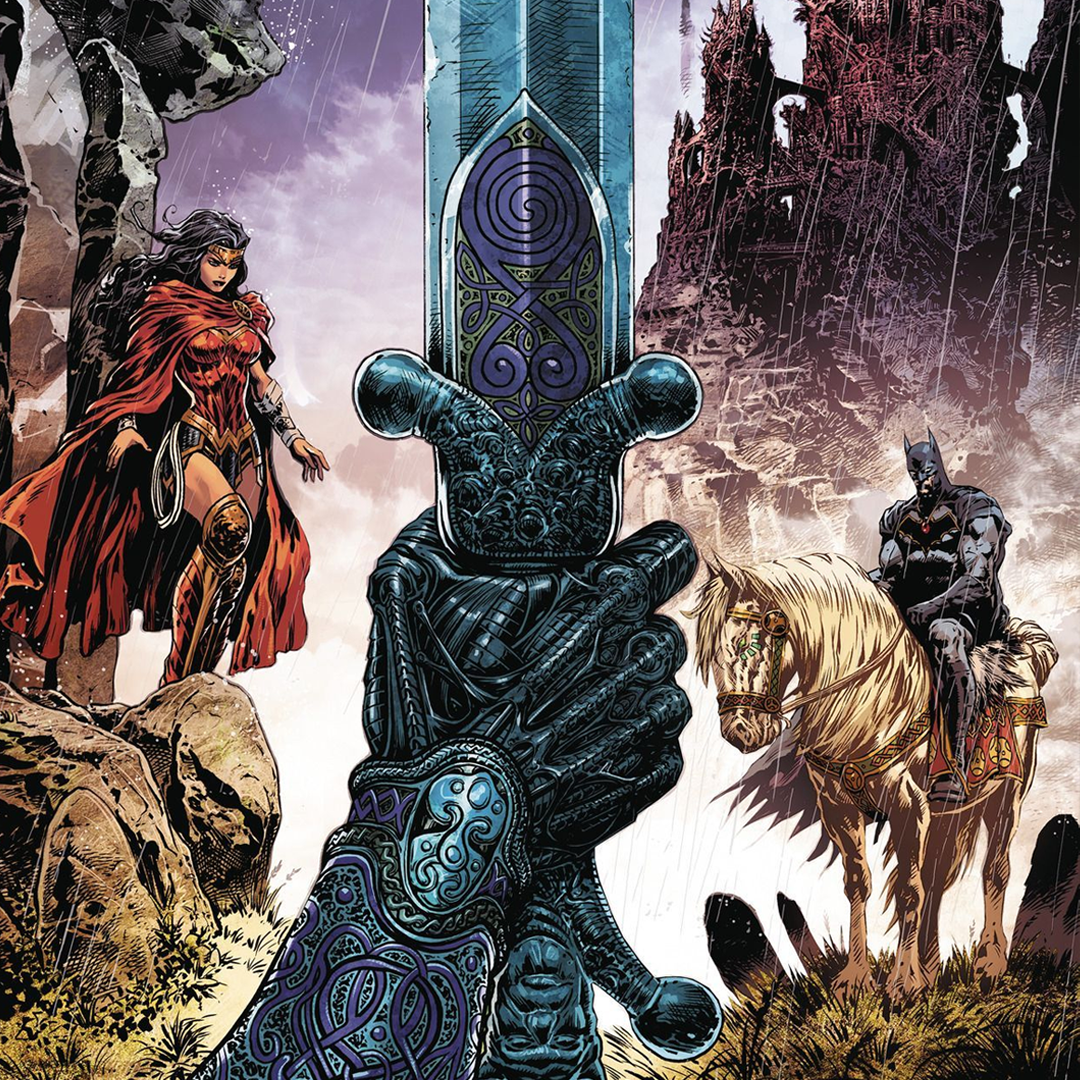 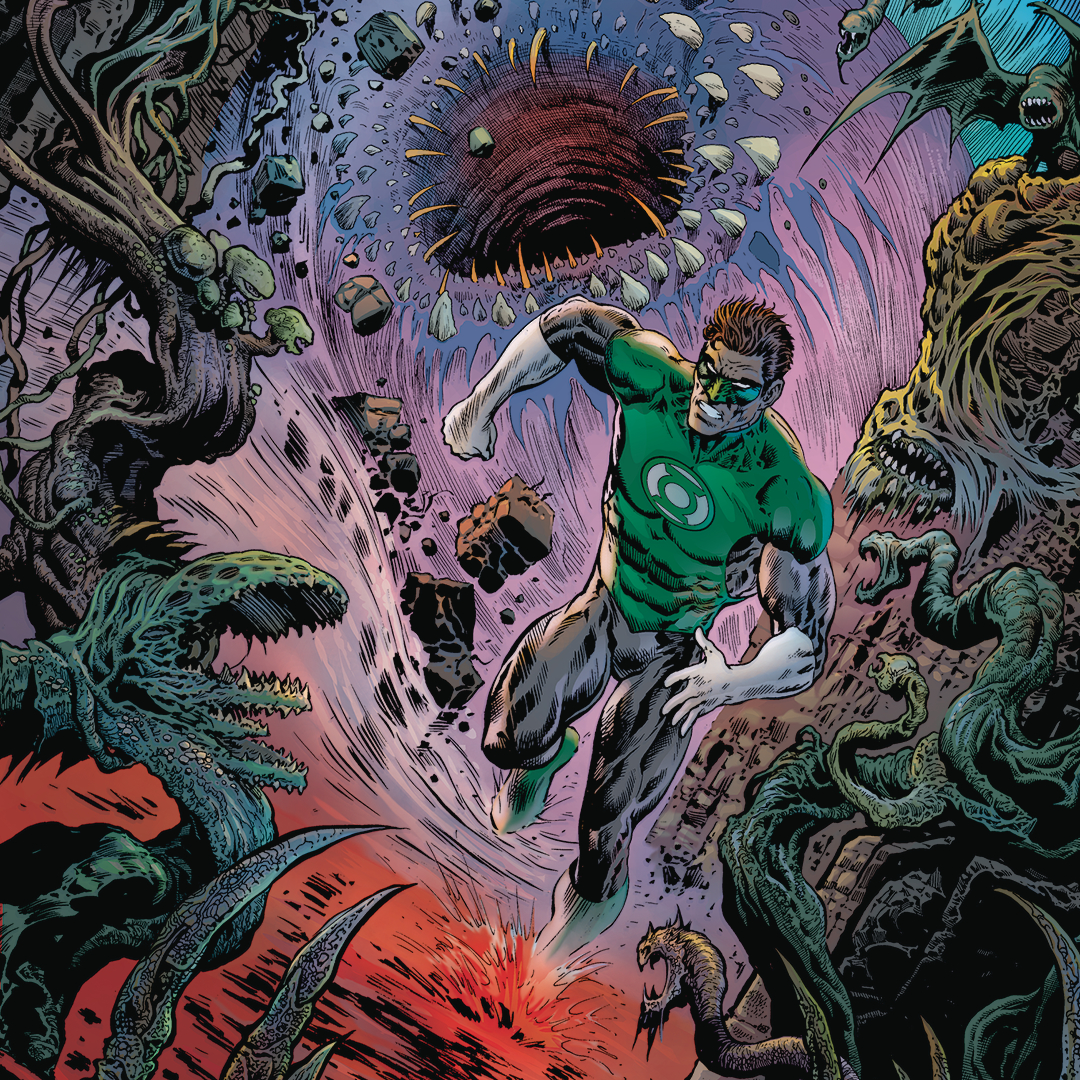 While Liam lives across the Atlantic, his roots lie in Eastbourne, training and working in tandem with Chris Weston at the beginning of their careers, where they worked under the tutelage of Don Lawrence, one of the most famous and celebrated names in the British comics industry.

Although Liam took a break from mainstream comics during most of the 2000’s, he made a huge comeback in 2016 with the launch of DC’s new Wonder Woman series (seen as a huge influence on the recent blockbuster adaptation. Speaking to DC on his return to big superhero comics, Liam said, “Wonder Woman was so unexpected. It’s all about timing. I had been working with Madefire (Sharp’s revolutionary motion comic book company) and it came to a point where there really wasn’t anything for me to do there anymore. It was all set up and working. It was time to let my baby go and leave it in the hands of the people who were taking it forward. I really, really needed to get back to drawing again. I’d been missing it. I hadn’t drawn much for five or six years. I also really missed the mainstream. It’s funny. I hadn’t intended to fall out of the mainstream. It just sort of happened.”

Home to some of world’s greatest comic book illustrators our little coastal town is proud to celebrate its contribution to this invaluable art form. All Eastbourne residents are able to meet, greet and get drawings from these industry icons, all at a completely free-to-attend event. If you’re curious about the world of comics and want to meet some of the most talented names working right now, make sure you book your Bank Holiday Monday off and head to Scorch for a pure celebration of everything in the world of comics.

Both events are completely free-to-attend and family-friendly. For more information on the day you can contact Scorch directly via their Facebook page, or by phone on 01323 398859, email info@scorchcomics.com or follow them on social media @scorchcomics