The rise of cosplay: how it wowed the wider community 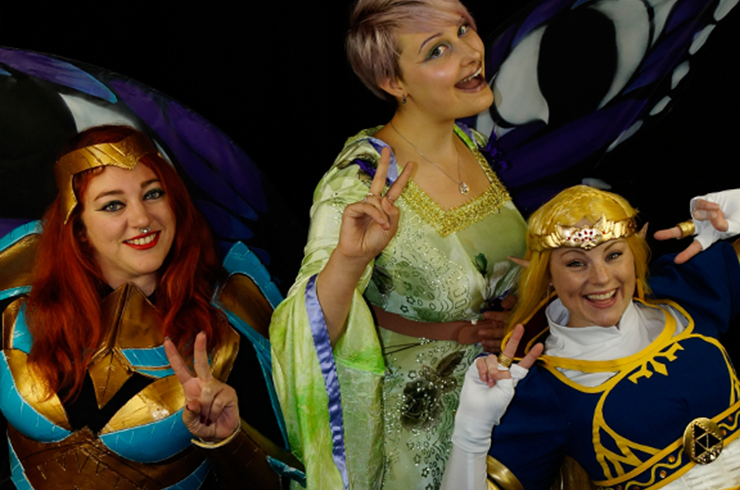 Just think – until recently, not many people knew about the super-creative, fun, loveably barmy world of cosplay! Ten years ago, outside of hardcore fans, few in the UK’s wider community had even heard of cosplay.

Ah, how times change. In 2018, London’s MCM Comic Con was covered by national newspapers, includng The Express, Daily Mail, The Mirror. They all ran long photo-articles, featuring legions of cosplayers proudly decked out in their costumes.

So, the question is, how did cosplay suddenly get so big?

One reason cosplay has grown is that in recent years, it’s become far more inclusive.

Take our own Wyntercon event. As organisers, we pride ourselves on our inclusivity and our cosplayers are an amazingly diverse bunch. Great cosplay events attract all ages, genders (did you know two-thirds of cosplayers are female?), body shapes and backgrounds. Increasingly, whole families are visiting cosplay events together.

As we say in our motto, ‘it doesn’t matter what world you come from, you’re welcome in ours!’

And the reasons for taking part are just as varied. For many, cosplay is all about the fun of being another character and escaping from everyday life. Others are more interested in the creativity of producing their characters and costumes. There’s also feeling part of a community, meeting new people, perhaps even competing.

The simple fact is that there are as many reasons for getting into cosplay as there are types of costume. Happily, that’s drawing in all sorts of new people from the wider community.

Another reason cosplay has escaped into the mainstream is the rise of social media.

Cosplayers have always loved sharing their costumes, activities and experiences. But a few years back, no one outside of the cosplay community got to see them. Social media has changed all that, allowing a mainstream audience to see what cosplay is all about.

Youtube, for example, has really helped spread the cosplay word. Thanks to those wacky algorithms, cosplay costumes started popping up in users’ sidebars. Videos made by cosplayers were clicked, watched, liked and — most importantly — shared.

Now the public could see first-hand the pleasure in making a costume or character. They got a glimpse into the terrific cosplay community. They could feel the buzz of live events.

The secret was out: cosplay is fun.

Our final reason cosplay has reached the wider community is the recent love affair with superhero movies.

Films like Avengers: Infinity War and Black Panther are breaking box office records right, left and centre. Even a new superhero film trailer gets covered in mainstream media. Back in the day, only a comic-book nerd knew his Loki from his Dr Strange. Now, they’re household names.

Blockbuster superhero films have definitely given a boost to cosplay. Millions of new fans want to express their enthusiasm and immerse themselves in those colourful worlds. And what better way than actually becoming their favourite super-powered character?

Cosplay has something for everyone?

There’s no doubt about it, cosplay has come a long way. In events up and down the UK, it’s now enjoyed by tens of thousands of people. As we’ve seen, it’s great for superhero and fantasy fans, creative people, families, people who want to express a different side of their personality…and just anyone who wants to have a great time.

So, we know that ‘something for everyone’ is a bit of a cliché…but for cosplay it’s true! Ultimately, that’s what has allowed cosplay to break out and wow the wider community.